We were contracted to perform localized cleaning, spot patination and refinishing, and an investigative probe of the Cast Bronze Night Doors at the House of the Temple, The Scottish Rite for Freemasonry Building in Washington, DC.

The exterior cast bronze doors suffered an attack of vandalism that was noted by the building supervisors in the Fall 2014. The vandalism included scratched graffiti, oil stains, and smeared traces of dog excrement. The scratched graffiti was located above the lion head doorknockers in the center panel on both doors. The graffiti was scratched into the bronze with a thin sharp object that was deep enough to expose the bright metal surface. The oil stains were located on multiple locations on the lower and upper panels and the dog excrement was smeared on the top of the door and transom.

The oil stains were removed with solvents and the dog excrement smears were removed with a water and non-ionic detergent solution and scrubbed with natural bristle brushes. The scratched graffiti was first cleaned and  patinated and then inpainted with fine artists brushes and color-matched acrylic paints. The bronze was then coated with a cold paste wax to protect it from further damage. A probe of the door hinge mechanism was tested to provide information for the future restoration treatment of the doors. 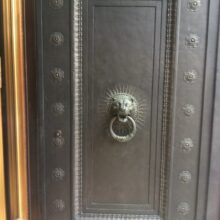 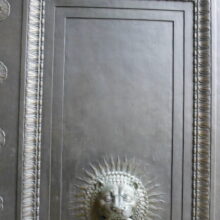 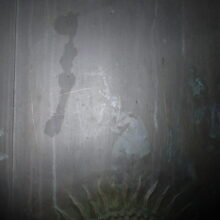 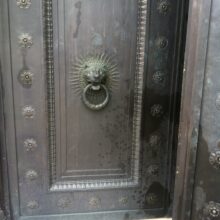 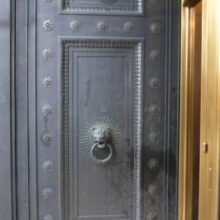 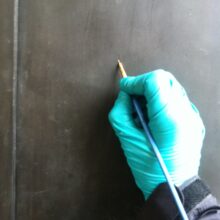 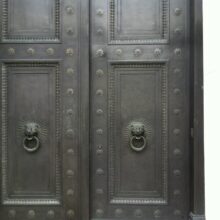