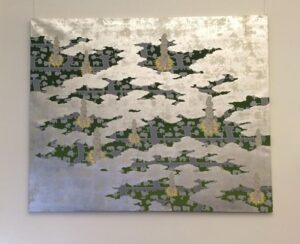 John Coburn began working at EverGreene shortly after finishing his MFA at the New York Academy of Fine Art in 1997. In Bring It On (2006), we witness an attack on a well-groomed subdivision, from a bird’s-eye-view, rendered in a flat, graphic style—as if it were a screenshot from a video game. Bombs hit their targets in, comic book-like “kaboom!” or “splat”, while a murky, aluminum leaf fog hovers above the community. The scene pits serious tragedy alongside light-hearted play—the video-game missiles affecting mass destruction in a recognizable residential community—to ultimately achieve a striking comment on the way our federal government regards our own wartime actions.

From the artist: The title, “Bring It On,” is a reference to the now immortal words of George W. Bush. As much a piece of light decoration as a political statement, this work was made in response to the War in Iraq, as a reflection on the lightness with which it was undertaken.