The Cincinnati Music Hall project skillfully balanced restoration and modernization of one of the most architecturally acclaimed multi‐function performance venues in the world, recently on the National Trust’s “11 Most Endangered Historic Places.”

Renovation work began in 2009, but the scope was soon reevaluated after deeming the project economically infeasible. In 2014 a new $83 million concept was approved, the Music Hall was awarded allocation for a $25 million State Historic Tax Credit, and the redevelopment project moved forward.

EverGreene’s team of artisans and craftsmen removed a drop ceiling that was installed during the building’s 1970 renovation as an initial step in the renovation. After its removal, the original stenciling was revealed, but unfortunately the century-old plaster was deteriorated beyond repair. EverGreene reproduced the stencil by documenting the patterns, completing a paint analysis for color matching, and mapping the stencil placement on the ceiling and walls. Back in the Studio, the patterns were laser cut and issued back to the site where the application process was completed, just as a traditional craftsmen from the late-Victorian era would have completed, by taping the stencil to the wall and painting by hand. 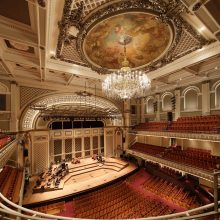 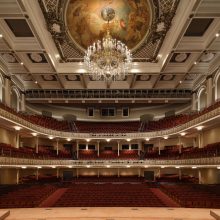 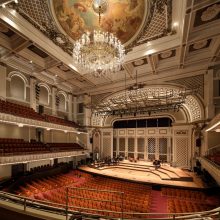 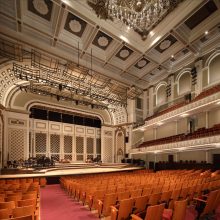 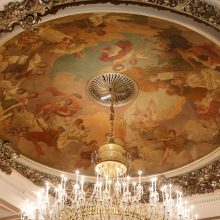