EverGreene removed and reinstalled sections of ornate plaster coffered ceiling to make way for the glass partitions. Once demolition began, craftsmen noticed portions of the ceiling were detached from the structure.  After devising a restabilization plan, plaster specialists applied both mechanical and traditional techniques to reattach large regions of the plaster ceiling to the structural system. EverGreene also coordinated with MEPS trades to accommodate new devices and fixtures in the ceiling.

75% of the original coffers were reinstalled; those damaged beyond repair were recreated. EverGreene implemented new framing in certain ceiling sections to provide future access to the mechanical system. These large-scale ornamental access doors blend seamlessly with the rest of the coffered ceiling. After the ceiling sections were reinstalled, they were inpainted to match the existing finish. 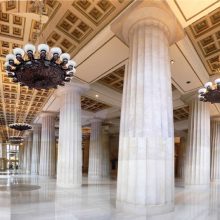 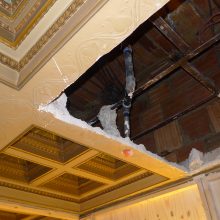 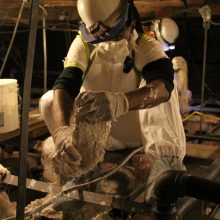 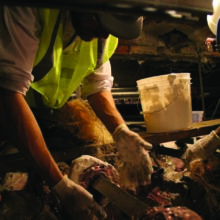