This Beaux Arts-style Classical Revival office building, also known as the London Guarantee Insurance Building, is one of Chicago’s most prominent skyscrapers. It is part of what defines the skyline at Michigan Avenue and the Chicago River. Many of the unique design details of the building were lost in a 1950s imposed modernization. The original glass and cast iron entry was destroyed and replaced by flat granite slabs and low stainless doors. The interior 30-foot-tall rotunda was covered with a “modern” acoustical tile ceiling. The renovation sought to return the building to its original character in both space volumes and detail.

The building suffered from neglect and by 1996, when it was designated as a Chicago Landmark, it was 70 percent vacant. The owners restored the facade and historic decorative plaster ceiling finishes, and retrofit the mechanical infrastructure to attract Class-A tenants to this premier location.

A team of EverGreene decorative plaster experts and painters reinstated gilding, glazing and polychromy on the 30-foot-high ornamental plaster ceiling, and 120-foot-long corridor. As part of this project, EverGreene designed and painted two new lunette murals for the lobby. The building was converted into a hotel in 2016. 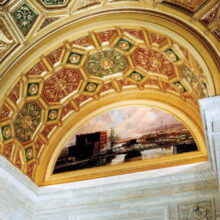 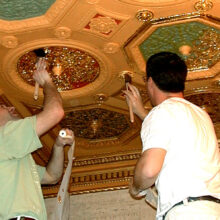 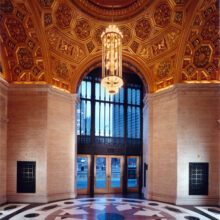 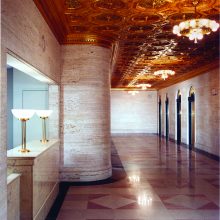