The wall was removed and salvaged when it was removed, symbolically ending the division of Europe into the Eastern Block controlled by the Soviet Union and the free West. The wall fragment was moved from a temporary siting on the grounds of the German Embassy to an exhibition site within the Diplomacy Center at the State Department. It consists of a reinforced concrete “L” shaped form, approximately 1 m wide by 4 m tall by 2 m deep. The back of the vertical wall section had been painted all over by the artist Michael Fischer with cartoonish groups of faces and banners with slogans in German extolling freedom. A similar image covers the upper ¼ of the front face with the slogan “WIR SIND DAS VOLK” (WE ARE THE PEOPLE) painted over it in red. The lower section of the front face has been over-painted with a light gray background on which are the signatures in black marker of numerous luminaries associated with the end of the division of Germany and the events around the opening of the Berlin wall. Black metal block lettering giving the names of the signatories is mounted beneath each signature, including that of the artist on the backside. The horizontal sections at the foot are not painted.

We were engaged to oversee the removal and transport, which was performed by a German firm who brought it over originally. It was installed at the Diplomacy Center during its construction while the site had no roof. We were then engaged to monitor conditions throughout construction. Later treatment of the artifact will occur prior to opening of the display. 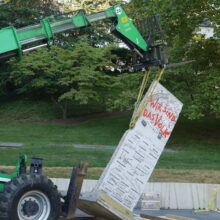 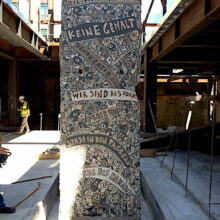 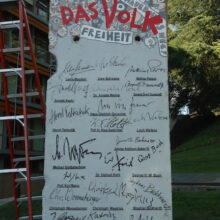 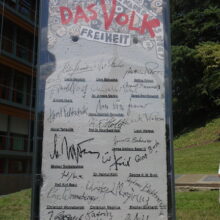