The Bethesda Theatre has evolved in many ways throughout its life. Designed by John Eberson, it was born as the Boro Theatre in 1938 as a Streamline Moderne movie theater with all of the latest viewing equipment. It echoed the thrill of the industrial age and boasted a tower and marquee on a brick facade. In ’83, it was transformed into a restaurant and movie house and renamed as the Bethesda Cinema & Drafthouse, later known as the Bethesda Theatre Cafe. In 2001, Donohoe Construction Company built a high-rise residential tower above and around the historic theater, which was being used as a live performance venue at the time.

In 2003, EverGreene conducted a historic finishes and mural conservation report including photo documentation. Plaster restoration and repair, historic wall covering restoration, stenciling, decorative painting, and decorative paint restoration occurred throughout the auditorium and lobby including the domes as well as the astral ceiling mural. Wood and marble were then cleaned and repaired, and the Bethesda Theatre was given new life as a theater playing Off-Broadway productions and cabaret-style shows. 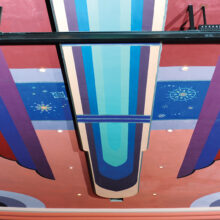 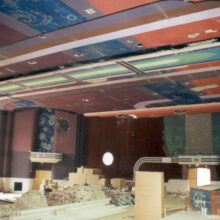 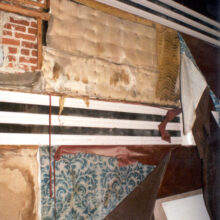 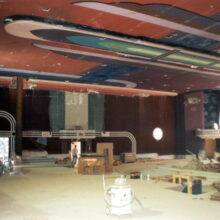