The Colorado State Capitol Building began was constructed between 1886 and 1903. It was initially designed in 1885 by architect Elijah E. Meyers, who also designed the state capitol buildings of Michigan and Texas. In 1889 Meyers was dismissed from the project amid significant cost overruns. Architect Frank E. Edbrooke assumed oversight of the project in 1897, and in 1903 the building was completed. The Colorado State Supreme Court operated in the north wing until it was relocated in 1977 to a new building across the street, which was demolished in 2010 to make way for a larger court building, completed in 2013.

The Colorado State Capitol was listed on the National Register of Historic Places in 1974 as a contributing structure to the Civic Center Historic District. In 2012, it was recognized as a contributing property to the Denver Civic Center National Historic Landmark District. The building has recently undergone alterations related to life safety improvements, geothermal heating and cooling systems, and the restoration of the House and Senate Chambers.

Our conservators conducted investigations of historic interior painted finishes, including microscopy and color analysis, in the Old Supreme Court Chambers at the Colorado State Capitol in March, 2018. The purpose of the finishes investigation is to support rehabilitation efforts by documenting historic decorative schemes and color palettes for the plaster walls, ceiling, and ornamental features of the room. Results indicated that the Supreme Court Chamber was originally decorated with distemper paint in shades of orange-brown, tan, and ochre, with gold metallic highlights, and stencil decorations in brown and gold reflecting classical Greek ornamental motifs. These historical decorative schemes appear to be largely intact below the overpaint. Munsell color matches were identified by the original coloring of historic finishes.

Our team used the information gathered during the investigation to replicate the historic finishes. Our crew prepped, painted, and stenciled the historic plaster to restore the visual appearance of the room. 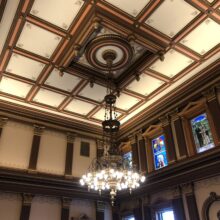 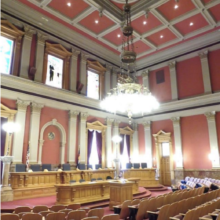 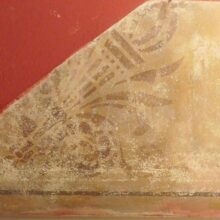 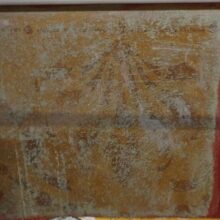 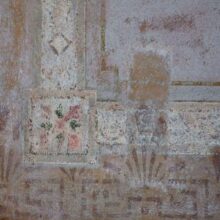 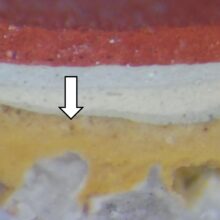 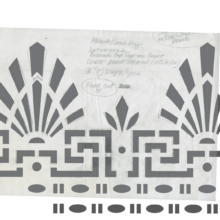 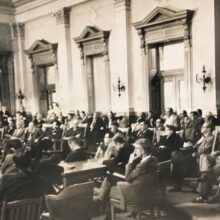 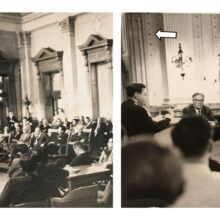