The Golden State Theatre opened in 1926. Designed by the architectural firm Reid & Reid as an atmospheric movie palace, it was intended to simulate a courtyard in a Moorish castle. EverGreen began working with the theatre when their lobby ceiling was damaged. We restored and repaired the damaged plaster and decorative painting, including the adjacent mural.

Our work included patching the plaster, reinstating the painted decoration in areas of loss, and cleaning and touching-up the mural. We created replications of seven ceiling panels, the design of which was developed to match the original color scheme discovered by our team. The panels were re-created on vinyl canvas, which was stretched, primed, traced, pounced, base painted, stenciled, hand-painted, stripped, and finally installed. After our work was completed, the lobby ceiling was stable and beautiful once more. 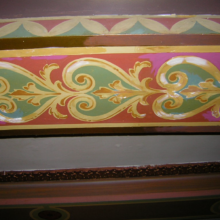 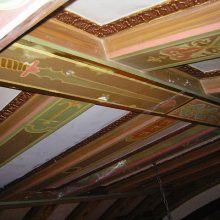 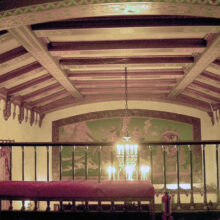 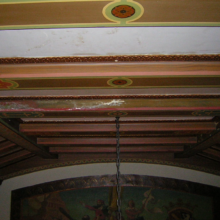