For a major exhibition on Laurelton Hall—Louis Comfort Tiffany’s Long Island home lost to fire in 1957—we were engaged to design and build structural support systems to re-create the original installations of the Daffodil Terrace and the living room fireplace and mantel. The salvaged stone and glass elements had been removed from the ruins of the building after the fire and remained in storage since then.

The new mountings had to safely support the damaged architectural elements in their original configurations and preserve their appearance. They also had to be capable of being knocked down and transported to at least two museums for both temporary and permanent installations. The designs had to satisfy life/safety concerns while not jeopardizing the integrity of the historic originals and be built on a limited budget under tight time constraints.

Working with an engineer and another conservation firm, we developed and built mountings that met all of the requirements. Marble and glass columns of the terrace were cored to allow the installation of stainless steel rods that compressed the assemblies and tied to a steel overhead armature. This also supported the frame from which the wooden ceiling was hung. The fireplace stones were mounted to steel frames that were supported on a hidden I-beam structure. The assembled structures were exhibited in New York, followed by reinstallation in Florida. 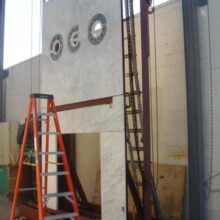 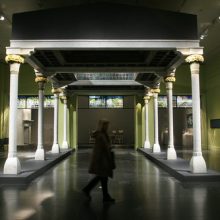 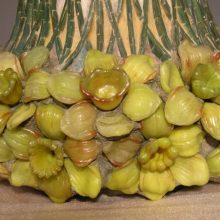 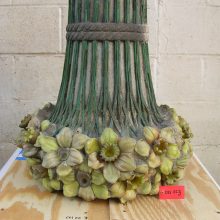