The Woman’s Christian Temperance Union (WCTU) is the oldest continuing non-sectarian women’s organization worldwide. Their purpose was to combat the influence of alcohol on families and society, perceiving alcoholism as a consequence of larger social problems rather than as a personal weakness. As such, they funded public works intended to get people out of the bars and saloons. One of these projects included the erection of public drinking fountains like the Lion Fountain in Las Vegas, New Mexico.

The Lion Fountain consists of a base, pedestal, basin, plinth block, and lion sculpture all carved from local reddish-brown sandstone typically referred to as “Romeroville Stone”. The carving was attributed to a local artist and created circa 1896 in a traditional style using folk elements and details. The fountain is in poor condition and suffers from extensive delamination and contour scaling along the bedding planes of the stone.

We visited the Lion Park in October 2008 in order to examine the fountain and collect materials for testing. The goal of the assessment was to determine the cause and extent of the deterioration of the sandstone in order to prescribe treatments to restore and preserve the fountain. A conservation plan was developed identifying the agencies driving the deterioration of the original fountain and providing the client with a methodology to conserve the existing artifact. Due to the extent of deterioration, guidelines for disassembling and storing the original, while recreating and installing a new fountain were also included. 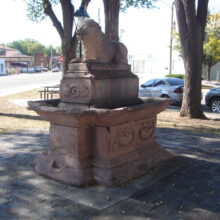 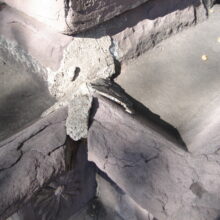 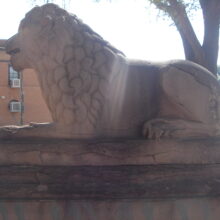 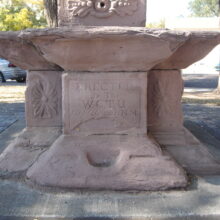 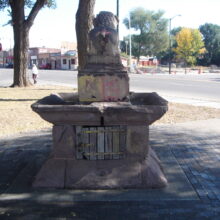