Originally built as Temple Tifereth-Israel in 1924, the Temple was led by the influential Rabbi Abba Hillel Silver and by 1927 had the largest reformed Jewish congregation in the United States.

In 2010, the Temple entered a partnership with Case Western Reserve University thanks to funding from the Maltz Family Foundation of the Jewish Community Federation of Cleveland. The partnership allowed for this historic space to be restored and re-purposed. It now primarily serves as a 1,200-seat performing arts center for the University. On high holy days the space is utilized by the congregation for worship.

EverGreene was brought in at the onset of the project by the design team. We worked with the Acoustician and performed a finishes study in order to determine how to clean and repair the unique acoustics and finishes of the space.

The ceiling is made up entirely of Guastavino tile and the walls are cast in Akoustolith. Akoustolith is a porous acoustic ceramic material resembling stone. Developed at a time when public address systems were coming into use in houses of worship, akoustolith provides balanced acoustics and limits noise in large, high-ceiling spaces.

EverGreene cleaned, restored and sealed over 10,000 square-feet of the Akoustolith and Guastavino tile, accounting for the majority of the Temple’s interior walls and ceilings. Craftsmen repaired cracks and removed soot and dirt from the acoustic stone-like surface before applying a finishing sealer by using a waterless poultice. We consolidated and re-adhered tiles in Akoustolith units, as well as cast and made new replica units. 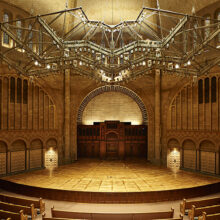 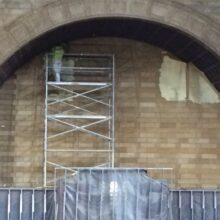 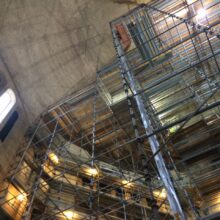 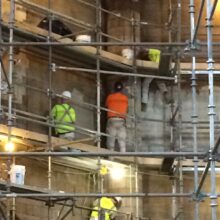 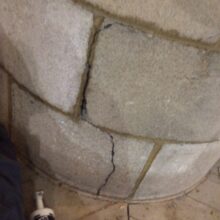