At the request of Jorge L. Hernandez Architect, we performed selective finishes sampling and analysis from interior and exterior spaces of the Miami Beach Community Church. The Spanish Revival church opened to the public in 1921 and has since earned local significance as a contributing resource to the Lincoln Road Mall, a National Register of Historic Places resource.

The goal of this study was to document the various finish campaigns extant on the building in order to establish an original color scheme and to help guide paint color selection in an upcoming conservation and restoration project. A total of 38 samples were taken from the interior and exterior of the church in order to investigate and interpret the record. The mounted samples were examined in cross-section and paint stratigraphies recorded. These were cross-referenced with several in-situ exposures as well as an examination of historic photographs.

Analysis revealed an enduring preference for white and pale cream finishes over the years. Interestingly, historic photographs and samples both confirmed that some of the surfaces had originally been unpainted but instead, the bare stucco had been treated with a translucent varnish or glaze. The finishes record also confirmed historical information describing how original exterior spaces were later converted to interior spaces. 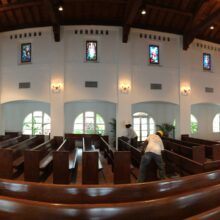 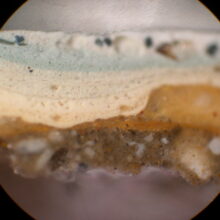 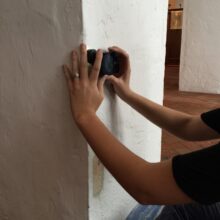