The Old Post Office on Pennsylvania Avenue in Washington DC was built at the end of the 19th Century within the Federal Triangle. It features a 9 story glassed atrium within the nearly full city block granite building. A clock tower at the north end includes a bell carillon. The building was considered obsolete shortly after its construction, partly because its style was inconsistent with the Beaux-Arts Classicism that became the norm for the area after acceptance of the McMillan Plan.

Despite repeated calls for its demolition, the building survived into the 1980s when it was restored to house various Federal Government offices. In 2015 the Trump Organization assumed a long-term lease to convert the building into a luxury hotel. The project was designed by Beyer Blinder Belle Architects and was tightly controlled by the GSA Historic Preservation Office, the DC Commission of Fine Arts, and the National Park Service. To ensure that work was in compliance with all of the oversight agencies the Trump Organization engaged us to work with the Contractor, sub-contractors and others to review conditions, submittals and work and provide guidance on treatments so that the building could be brought to the intended level of high-end finishes consistent with the owner’s and oversight agencies requirements. Through reviews, meetings, mock-ups, and presentations we were able to facilitate the successful completion of the work consistent with the many stakeholders’ interests. 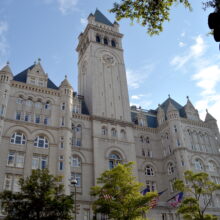 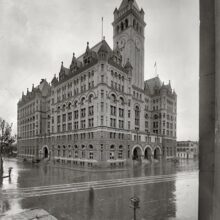 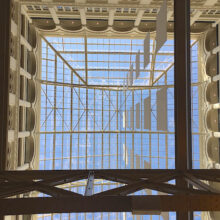 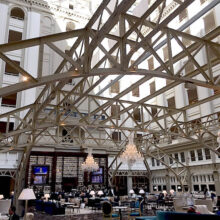