The Thompson Headstone is a private memorial in San Francisco National Cemetery dedicated to Thomas Thompson, a US Army private who died in 1899. The Monument consists of a sandstone sculpture of Private Thompson in a military uniform carrying a flag, perched atop a granite plinth.

The sculpture is made of local Colusa sandstone, which had suffered such severe delamination of bedding layers and structural cracking that it was deemed a safety hazard. The connection between the sculpture’s body and the flag in his left arm had cracked almost completely through and was threatening collapse. In order to preserve the sculpture, an extensive structural intervention was required.

We treated the Thompson Headstone as part of a large, multi-monument contract with the National Cemetery Administration. In order to stabilize the sculpture, seven stainless steel pins of varying lengths and diameters were inserted into the statue’s face and body. Drill ports and cracks were filled with color-matched grout, and losses in the sandstone were rebuilt and re-sculpted. The treatment successfully restored the structural stability and aesthetics of the sculpture. Treatment also included cleaning and repointing of the granite base. 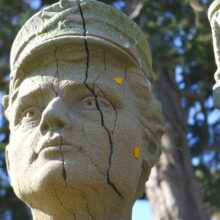 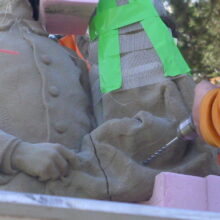 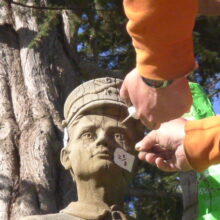 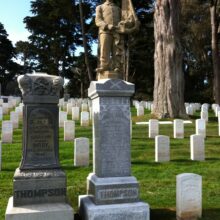 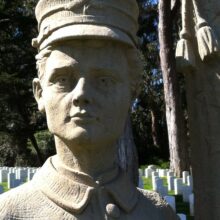