Wilshire Boulevard Temple, known as the Temple of the Stars, underwent an extensive restoration and seismic stabilization beginning in 2011. As a key partner of the project, EverGreene restored the plaster and painted finishes in the massive dome that measures 100 feet in diameter and about 130 feet in height.

After conducting a survey that revealed the primary source of damage to the ceiling was water infiltration, loose plaster elements were stabilized with consolidation and for missing pieces, molds were cast from the extant plaster and replacement elements were cast. Areas of damaged Celotex acoustic plaster were also repaired in vaulted ceilings, niches, simple box arches, and large ceiling beams. EverGreene implemented mock-ups to achieve the proper painted finish, which was executed with Keim paint, glazes, and composite leaf gilding. 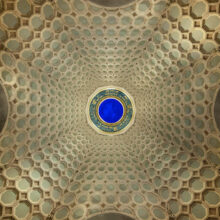 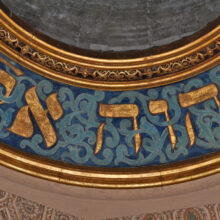 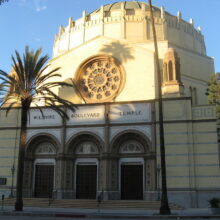 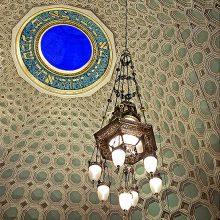