The Ancient Art of Mosaics

The Call of the Shofar

Mosaics are an ancient art form, with the earliest examples found in temple ruins in Mesopotamia dates to around 3,000 BC. Mosaics remained popular throughout the ancient Greek and Roman civilizations as decoration but did not enjoy status as a high art medium until the rise of Christianity and the use of mosaic as religious art.  Islamic and Jewish Sacred Spaces also adapted mosaics as religious art, usually creating mosaics with geometric patterns, abstract, or natural forms.

The Call of the Shofar Mosaic in the Nashville Reformed Temple was designed by the celebrated social-realist artist Ben Shan in 1959. Over time, cracks formed through the tesserae (individual pieces of stone or glass which make up a mosaic) and the supporting mortar such that conservation was needed to save the mosaic. EverGreene’s conservators investigated and documented the best techniques to clean and fill cracks and stabilize the mosaic, including replacing missing tesserae.

Ben Shahn worked at a time when immigration and civil rights were hotly contested issues, especially in Nashville where the mural was to be.  The Call of the Shofar depicts God’s calling men of a call races to unite together as one community. The mosaic expressed this universal message by combining multiple visual vocabularies and presenting it via an ancient art form. 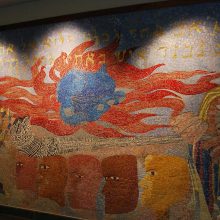