The fire curtain at Bucks County Playhouse depicts the town of New Hope, PA. Landmarks of the town can be easily spotted throughout the mural and tells the story of the townspeople’s daily lives. The mural was damaged by water and faded by time, and tears in the curtain overtime had rendered it very fragile and immobile. The distemper paint surface was soiled and there were numerous areas where the paint had flaked off the curtain, creating gaps in the composition.

Rigging experts were brought in to stabilize and carefully lower the mural to give the conservators access for treatment. Extensive testing and documentation for the conditions and methods for cleaning and repairing the artwork was performed prior to its restoration. Once effective methods were formulated, our conservators got to work cleaning the mural with a gentle vacuum, and use of dry conservation cleaning agents. The tears in the curtain were repaired, and the entire front and back of the curtain was sealed to encapsulate the asbestos, making it safe for public use, and prevent any further damage to the surface of the work.

Once the historic paint was isolated with a varnish, lost areas were filled in with reversible conservation paint. Missing information was not restored in full, but compensated tonally. Adding in any unknown detail was avoided to preserve the integrity of the work. Rather, we sought to enhance the overall aesthetic of the composition. 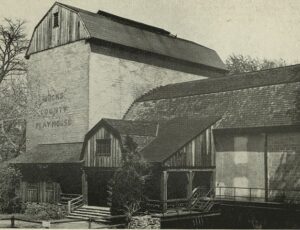 The Bucks County Playhouse is located in New Hope, Pennsylvania, at the site of a former grist mill on the banks of the Delaware River. The original structure was built in 1790 when owner Benjamin Parry rebuilt the Hope Mills, which had recently burned down. The newly christened New Hope Mills inspired the village to change its name from Coryell’s Ferry to New Hope.

Facing demolition in the 1930s, the site was saved when a small band of artists, including Broadway playwright and Bucks County resident Moss Hart, helped rally the local community to renovate it as a theater. The Bucks County Playhouse opened on July 1, 1939, with a production of Springtime for Henry, featuring Edward Everett Horton.

BCP has also showcased some of the theatre’s most beloved musicals and plays, including She Loves Me, West Side Story, Bye Bye Birdie, Annie Get Your Gun, The Glass Menagerie, The Odd Couple, Dial M for Murder, and Who’s Afraid of Virginia Woolf? The Playhouse has also launched many Broadway productions including the Pulitzer Prize-winning comedy, Harvey, Neil Simon’s Barefoot in the Park, and James Whitmore’s one-man show about Harry Truman, Give ‘Em Hell, Harry! 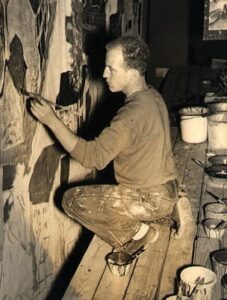 Charles Child was born in 1902 in Montclair, New Jersey. After an uneventful childhood, he entered Harvard University where he became the art editor of The Harvard Lampoon. He then spent five years in Europe and Asia, studying and honing his artistic techniques. Upon his return to America, he used those skills and experiences to become a peripatetic artist who ventured into portraits,

In the 1930s, he painted the fire curtain for the Bucks County Playhouse where he depicted the town of New Hope, Pennsylvania. Local landmarks are Bowman’s Tower the Logan Inn, and New Hope Railroad Station, as well as The Playhouse. Many aspects of the townspeople in their daily lives, including a nude sunbather and artists setting up easels, are painted around the landmarks to emphasize New Hope’s reputation as an artists’ colony. In 1937, as part of the WPA program, he created the mural William Markham Purchases Bucks County Territory, oil on canvas, for the Doylestown, Pennsylvania main post office.

He directed the art and music section of the Cultural Board of the State Department in 1942 and later he was an advisor on the Arts and Humanities Board and helped to develop a cultural exchange program. He illustrated and wrote a book in 1965, Roots in the Rock, which was a non-fiction account of the building of his summer home in Maine. For many years, Child wrote a weekly column for the New Hope Gazette called “The Inner Eye”, focusing on his travels and observations of contemporary life.

An interesting side note on Charles Child is that his twin brother, Paul, also an artist and a poet as well as a cartographer and a member of the State Department, met and married in 1946 Julia McWilliams, eventually famous as Julia Child, The French chef. 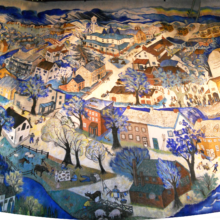 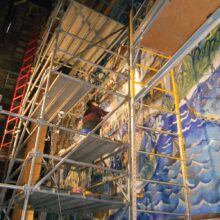 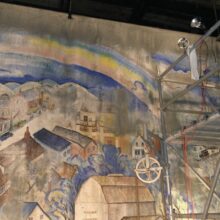 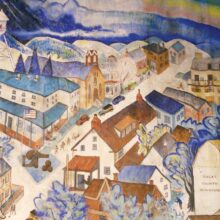 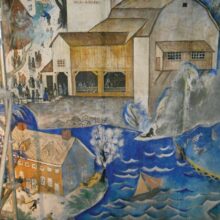 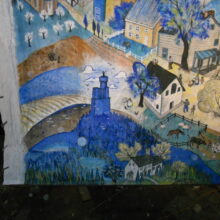 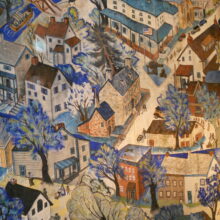 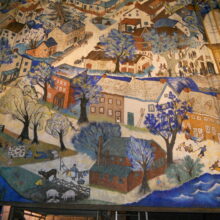 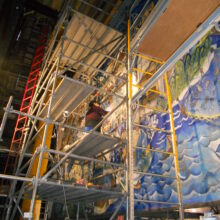 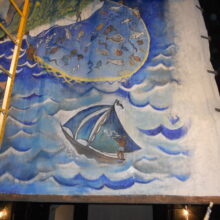 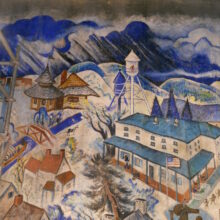 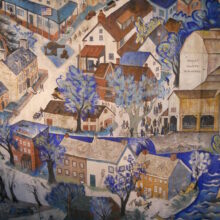