In its fifth year, Technology Publishing Co.’s commercial honors program, The Elevation Awards, expanded its reach by partnering with the Commercial Painting Industry Association. As a result of the partnership, the Elevation Awards received the most competitive nominations that the judges had ever seen. In recognizing the very best work in commercial painting, in addition to the people behind the coating jobs—the architects, painting contractors, interior designers, decorative artisans, manufacturers and suppliers—the annual competition continues to raise the bar for industry excellence.

Assessed by a panel of painting experts, the James Farley Post Office Lobby was awarded in the program’s “Interiors, Commercial + Public Buildings” and “Judges’ Choice” categories.

EverGreene’s scope of work included restoring plaster, paint, metal, terrazzo, marble, wood and historic lighting. The work can reportedly be best viewed by walking through the main postal lobby and looking up at the ornate plaster ceiling that was meticulously repainted to give the space a much needed makeover.

“The Farley Post Office Lobby has been an incredibly rewarding project to be part of,” said Project Manager, Andrew Maziarski. “Knowing what the space looked like a year ago, and seeing what it has become, has been a career highlight. The craftspeople involved with this restoration took great pride in their work and have helped to renew a New York City Landmark.” 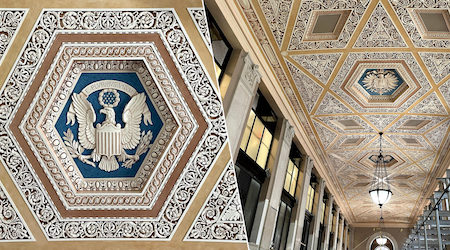 Farley Post Office Restoration
EverGreene was involved with the restoration of the original Postmaster’s suite, the 33rd Street lobby and cafe, and the 8th Avenue postal lobby.
View Project 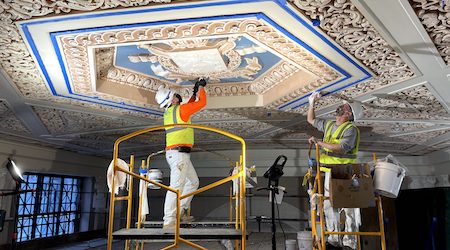