From Movie Palace To Place Of Worship

The Times Square Church is a building with a long history that brought it from a movie theater, to a Broadway theater, to an Interdenominational Church.

Originally built in 1930 as the “Warner Brothers Hollywood Theater” movie palace, the current French Baroque interior decoration scheme is original to the building and was a typical design scheme for 1920’s movie palaces. Although designed as a cinema, the Hollywood’s stage was one of the largest on Broadway and by 1934 the Hollywood began presenting Broadway musicals. It presented both musicals and films until 1948 when it was bought by a wealthy producer who renovated the building with the intention of turning into a full time Broadway theater and renamed it the Mark Hellinger Theater after the famed theater columnist and film producer. The venue had a smash hit with the original production of My Fair Lady which ran from 1956 to 1962, and continued to show musicals through the end of the 1980’s.

In 1987, while Times Square was an epicenter for strip clubs, drugs addiction, and prostitution, Pastor David Wilkerson sought to open a church for the “physically destitute and spiritually dead people” he saw in the area. The Times Square Church originally held service in The Town Hall on 43rd Street and then in the Netherlander Theater on 41st before settling into its final home at the Mark Hellinger Theater in 1989. The church kept the original interior of the 1930’s theater and the current congregation of the Times Square Church represents over one hundred nationalities who gather to worship every week.

When the Times Square Church needed restoration work done on the ornate ceiling, EverGreene devised a solution to suspend a giant platform from the ceiling which protected patrons from the work above, using the original bolt ties that were still in place from when the building was constructed. This allowed our craftsmen to get close enough to restore the brilliant ceiling while keeping the building fully operational. 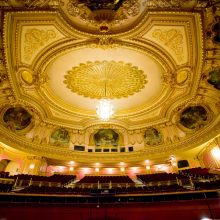 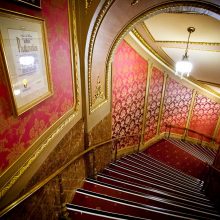 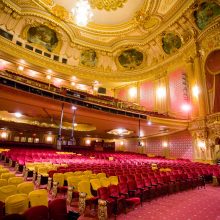 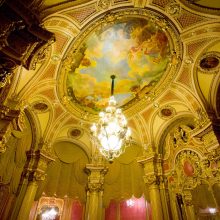