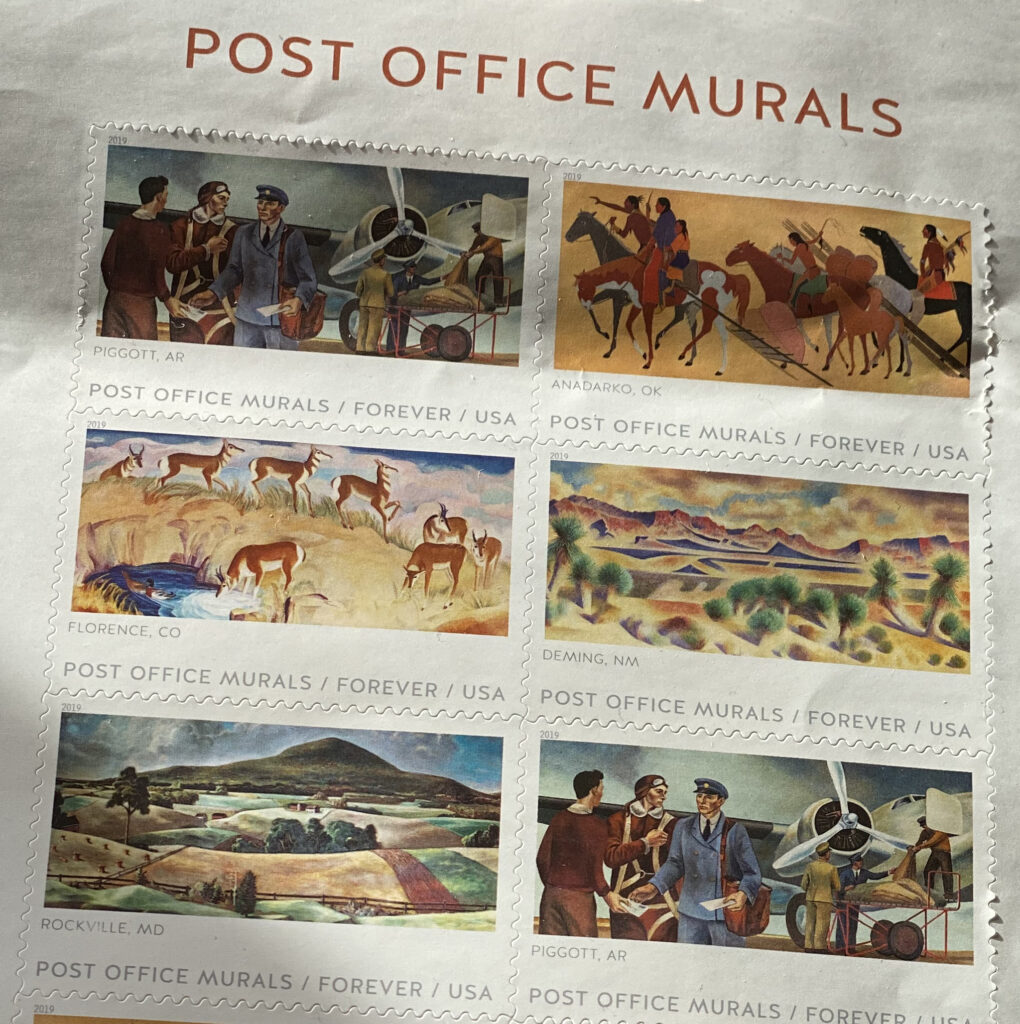 Have you ever noticed a colorful mural in your local post office? Did you realize the United States Post Office (USPS) shares beautiful artwork in their spaces as well as on the stamps we use everyday? Has the power of art in public spaces  impacted you during this unprecedented year?

During the crisis of the Great Depression in the United States, the USPS participated in creating murals through the New Deal as a way to provide relief for artists and to bring their art to people in both small towns and large cities alike. In 1933, President Franklin D. Roosevelt initiated the Public Works of Art Project, which paid 3,700 artists to decorate public buildings nationwide. They were commissioned through a competitive process by the United States Department of the Treasury. Some 1,400 murals were created for federal post office buildings in more than 1,300 U.S. cities.

This past August, Andrew Russeth of Architectural Digest stated, “the USPS has helped shape our national identity by bringing art and architecture to every part of the country. Its vast art holdings exemplify the vitality of public goods and spaces.” (Read the full  Architectural Digest article here.)

Texas-based Photographer Justin Hamel expressed a similar sentiment when he added that “The murals boosted morale by celebrating local industry and historical events. Today these murals often go unnoticed, almost like real-life Easter eggs of art hidden across the country.” Hamel documented nearly 375 of these works of civic art while traveling across the United States. (Read the full Atlas Obscura article here.)

Times of crisis are oftentimes difficult for artists, but their contribution to society is just as important. At the height of COVID-19 in April 2020, the Americans for the Arts reported that a staggering two thirds of artists were unemployed. Perhaps USPS art restoration is an exciting opportunity to provide meaningful work. They could be involved in repairing and enlivening post offices with new murals and other forms of art. This can also deliver a measure of diversity. While the New Deal mural program employed mostly white men, a new initiative could embolden an array of Americans to create a new and lasting cultural legacy.

EverGreene has always taken pride in all the murals we have restored and conserved across the country in federal and government buildings. We have witnessed the power of art to both raise morale and create cohesion in our communities. We stay positive that artists will be called upon to continue working with the USPS and continue bringing impactful art and architecture to every part of the country.