Across the state of Minnesota, there are a number of monuments dedicated to people, places and events significant to the history of the state of Minnesota. Among these monuments, pictured above, are the Colonel William Colvill Monument [left], the Fort Ridgely State Monument [center], and the Count Beltrami Monument [right]. The Colvill Monument commemorates the leader of the First Minnesota Volunteers, who were instrumental in the Civil War Battle of Gettsysburg. The monuments mark the grave site of both he and his wife. The Fort Ridgely was dedicated in 1896 and marks the anniversary of the 1862 US-Dakota conflict, and commemorates the soldiers who died during that conflict. The Count Beltrami Monument is dedicated to the Italian explorer, Giacomo Beltrami, who established Lake Julia, at the time thought to be the source of the Mississippi River.

In 2004, we were contracted by the Minnesota Historical Society to perform a condition survey of twenty-seven different monuments installed throughout the state of Minnesota. The goal was to document the materials, installation details and conditions of the zinc, bronze, iron and stone monuments and prepare treatment recommendations for each. Each monument was surveyed, measured, photographed and mapped (several were in obscure locations in abandoned cemeteries). Conditions and their likely causes were noted and recommendations made for treatment. A list was developed with priorities and cost estimates for the recommended work. 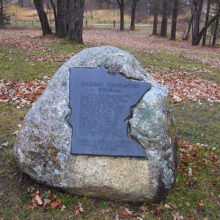 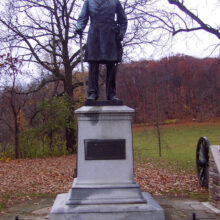 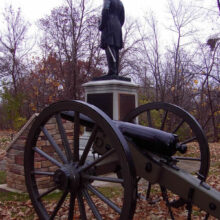 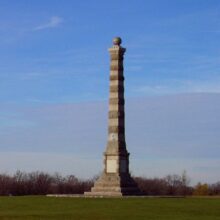