The 76th Illinois Volunteer Infantry Regiment Monument at Mobile National Cemetery was erected in 1892 in memory of Union soldiers who died during the Battle of Port Blakely, Alabama. The monument consists of a gray and white Vermont marble plinth topped by a copper sculpture of an eagle alighting an orb.

The eagle sculpture was originally gilded, but had lost its decorative finish and deteriorated significantly, resulting in many deformities of the copper. As the original eagle was a standardized catalogue sculpture, rather than a unique piece designed for this installation, the decision was made to replace the sculpture with a similar, high quality work of modern manufacture.

We treated the 76th Illinois Volunteer Regiment Monument as part of a large, multi-monument contract with the National Cemetery Administration. A copper eagle sculpture, that very closely resembled the original, was selected to replace the damaged original, which was removed and salvaged for the NCA’s collection. The new copper eagle was gilded with 23. 75 karat gold leaf. The gilding was applied using a traditional process of laying individual leaves with a slow-drying size. Once gilded, the eagle was installed atop the marble plinth, restoring the brilliant appearance of the monument at the time of its creation. 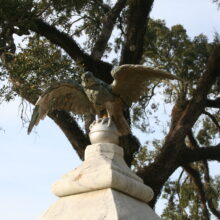 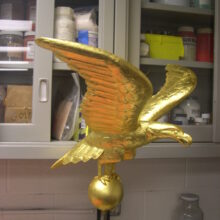 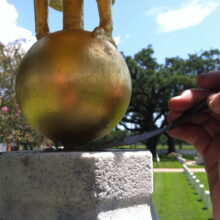 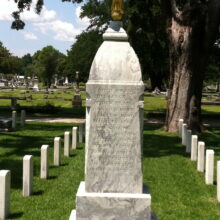