In 1886 the cornerstone for an eighty-five-foot-tall Confederate Monument was laid by Jefferson Davis in Montgomery, Alabama. Alexander Doyle designed a striking monument for the site, utilizing an eclectic mix of styles and an unusual combination of materials including limestone, bronze, and granite. The Alabama Confederate Monument now stands as one of the largest Civil War Monuments in the southern United States.

Despite previous treatment efforts performed on the monument, there was a need for repointing and restoration of the stonework. Biological growth had caused some discoloration to the base and moisture had triggered spalling and exfoliation in many of the stones. It is reported that in the late 1970s state workers scrubbed the bronze relief with an abrasive household cleaner, stripping it of its finish and doing considerable damage to the bronze band. The granite statuary also suffered from earlier insensitive treatments, including sand blasting.

The conservation of the stone monument (granite and limestone) included extensive cleaning, consolidation of the deteriorated portions, stone patching, dutchman stone repairs, dispersed hydrated lime injection repairs to the numerous cracks and fissures in the stone, and complete re-pointing of the monument. Lead caps were installed at water catch points. Missing bronze elements were measured and AutoCAD drawings were prepared for model making. The approved models were cast in bronze, attached to the monument, and finished to match the existing bronze by chasing and patinating. The bronzes were fully cleaned, repatinated and coated with Incralac. At the completion of the work, a maintenance plan was submitted to the client to provide a guide for the ongoing care of the monument. 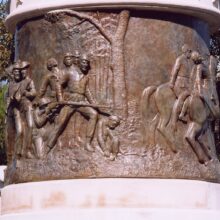 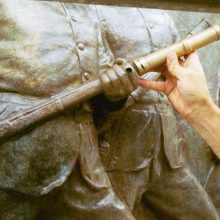 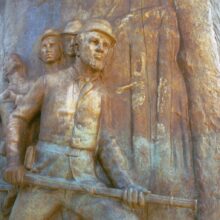 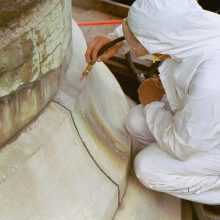 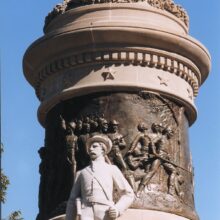 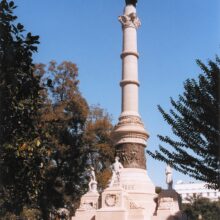 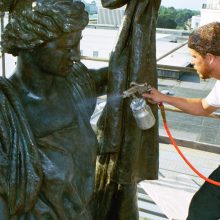