The Allied Textile Printing (ATP) site is a unique property with a long and storied history. The site is located adjacent to the Great Falls on the Passaic River in Paterson, New Jersey, one of the largest waterfalls in the United States. The vast potential of the falls to generate waterpower and thereby industry was recognized early on by Alexander Hamilton, who established a corporation of manufacturers to develop the site. In the centuries since, the site has been occupied by a variety of industrial tenants, most notably associated with silk and textile manufacturing, as well as an early Colt Gun mill. With the decline of industry in the last quarter of the 20th century, the site was finally abandoned circa 1980. Because the largest pieces of equipment would have been exorbitantly difficult to relocate, most were left onsite.

Since then, the site has suffered at least a dozen catastrophic fires, leaving most of the structures in ruin and the surviving artifacts highly exposed to the environment. In 2009, the ATP site, along with the Great Falls, were established as a National Historical Park, prompting plans to identify, preserve and interpret significant aspects of the site. In 2010, we were engaged to perform a condition assessment and make treatment recommendations for a variety of industrial artifacts on-site. Conservators performed a building-by-building survey; high-priority artifacts such as major boilers and tanks were identified, assessed, and thoroughly documented. Other more numerous artifacts were grouped by type or theme, and assessed based on general conditions. A hierarchy of recommendations was developed to address varying tiers of significance, interpretation, and levels of intervention. As plans for the park develop, it is hoped that it may be possible to preserve some of these elements in situ, maintaining the historic link between the artifacts and this significant site. 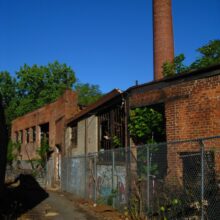 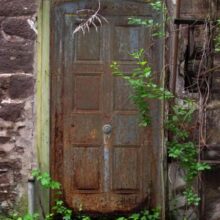 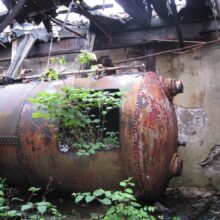 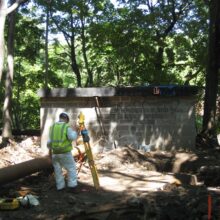