Altgeld Hall was designed in the Richardsonian Romanesque style by UIUC campus architects Nathan Ricker and James McLaren White. Completed in 1897 under the watchful eye of Illinois Governor John Peter Altgeld, it originally housed the university library. The three-story building, clad in rusticated Kettle River sandstone from Minnesota, is dominated by a bell tower on the east side of the facade

Painted decoration at the interior, including elaborate polychrome stenciling and four lunette murals, was designed and implemented by artist Newton Alonzo Wells with the assistance of his students. Together with colorful floor mosaics, the interior painting presented a spectacular and unified blending of Byzantine and Classical elements.

EverGreene conservators were brought in by Bailey Edward to conduct a historic painted finishes investigations in selected interior spaces of Altgeld Hall. The purpose of the investigation is twofold; one objective focuses on the assessment of historic lunette murals below the dome in the rotunda; the other objective is to expand upon previous work by others in the identification of historic decorative finish schemes in the rotunda, gallery, corridors, stairways, grand entry, and reading rooms, located on the second and third floors.

Historic finishes investigation identified two major historical campaigns of the decorative stenciling. The later generation of stenciling was broadly imitative of previous patterns, but omitted detail and utilized a different, muted color scheme. EverGreene provided recommendations for the conservation and restoration of decorative painting, in addition to conservation recommendations for the lunette murals. 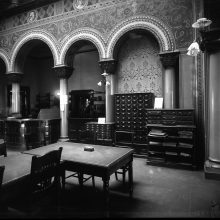 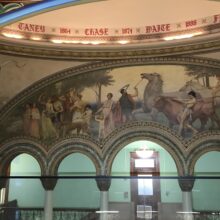 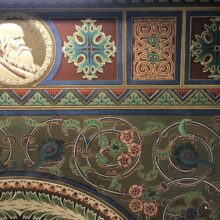 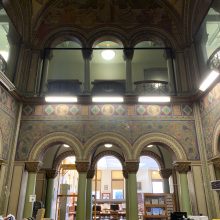 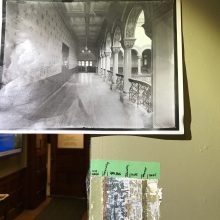 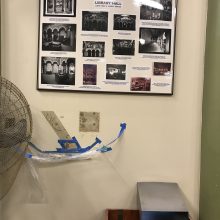 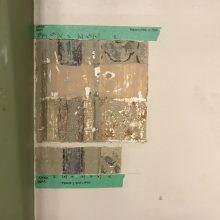 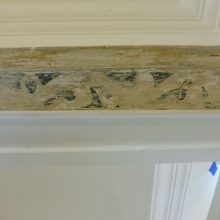 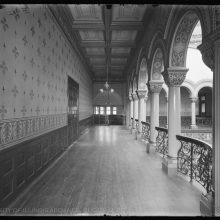