American Airways (now known as American Airlines) constructed their first administration offices and hangar building at Meacham Field, Fort Worth, in 1933 in the Art Deco style. The main entrance stands between two cast stone pilasters and comprises a set of double doors flanked by fluted aluminum engaged columns (approx. 16’ in height) with an aluminum spandrel panel decorated with the American Airways logo.

Prior to conservation, an arched awning above the double doors had been removed, leaving ‘ghost’ soiling and uneven weathering on the aluminum. There were remnants of sealant around the former awning; previous attempts to remove this had resulted in gouges in the aluminum. There were also multiple areas of abrasions, scratches, partially removed pencil marks, paint spatters and dents. Although an even, dark patina remained in some areas, there was a layer of atmospheric soiling over all surfaces, and some small spots of corrosion had developed.

We were contracted to clean and stabilize the metal while also preserving or restoring the decorative scheme of the entryway. Conservators used dry ice blasting to gently clean away the old sealant and soiling, while the logo was brightened using polishing pastes. After evening out the dark grey patina with patination chemicals, hot and cold waxes were applied to protect the finish. 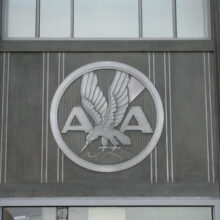 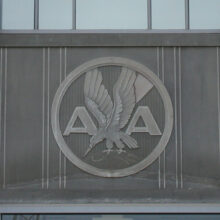 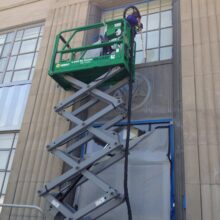 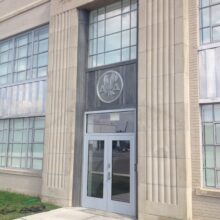