Established in 1851 following the Mexican-American War, the Armed Forces Retirement Home, Washington, DC (AFRH) is now home to four National Historic Landmark buildings, including the Lincoln Cottage. A perimeter fence and wall – composed of a stone knee wall with intermediate brick piers and topped with a wrought iron fence – was built along the property boundaries between 1876 and 1877, and survives as an integral part of the landscape today.

Since its construction, the perimeter fence and wall has deteriorated, leaving many of its brick columns and stone caps in disrepair. Installation of razor wire and chain link fencing on top of the iron fence caused further deterioration, although the former has since been removed. Most pressing, however, was a recent auto collision, which damaged the stone knee wall and several brick piers.

We were contracted to document and assess the current condition of the fence and wall, develop a scope and procedures for repair and provide recommendations for the future removal of the chain link fencing. We produced written and photographic documentation of the site, including an illustrated glossary of conditions. Recommendations were developed to be sensitive to the historic materials, including cleaning and reusing as much of the original brick as possible, and reversing the damage associated with the highly invasive chain-link fence. 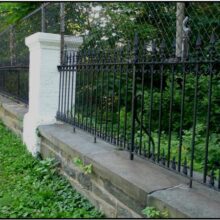 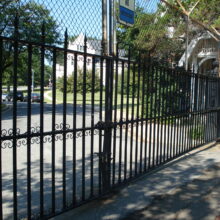 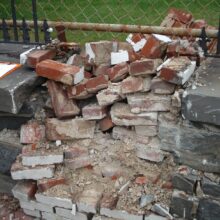 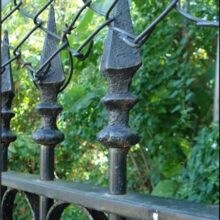 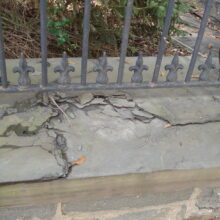