Built in the 1870’s in the Second Empire style, the Baltimore City Hall is a grand example of the civic pride and financial stature of the then-grand city. The marble building occupies an entire city block. Its impressive portico is supported by six fluted Corinthian columns and set off with four multi-headed bronze lanterns. Originally gas, the lanterns now shine with electrical illumination.

As part of an overall restoration of the façade, we were contracted to restore the lanterns and capitals of the columns. Numerous small castings and elements had been lost from the ornate lanterns, glass was missing or been replaced with plain glass (rather than beveled), and the surfaces had acquired the typical appearance of under-maintained bronze. The capitals had suffered from advanced “sugaring” and developed structural cracks that represented life-safety concerns.

Our conservators removed the lanterns for treatment in an art foundry. Missing elements were recreated, new beveled glass was cut and installed, and the lighting was up-graded. All surfaces were cleaned and coated with a conservation grade hot-applied wax. The capitals were cleaned with water misting and micro air abrasion. Stainless steel dowels were installed to stabilize cracks and potentially fragile foliate pendants were wired to the body of the capitals to avoid later losses. Cracks and losses were filled with lime-based grout and mortar. 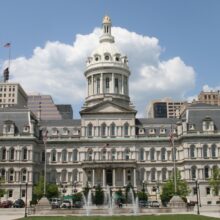 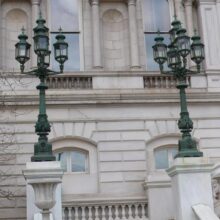 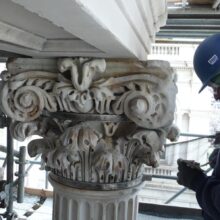 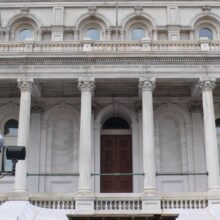