Mills Mansion is one of many Gilded Age country estates in the picturesque Hudson River Valley of New York State. Designed by McKim Mead and White for Ogden and Ruth Livingston Mills, the house was completed in 1896 on the site of a former Livingston family home. Situated just south of Rhinebeck in northern Dutchess County, the estate is now part of Staatsburg State Historic Park.

As part of the restoration of the ashlar stone walls that bound the site, we were hired to conserve two sets of identical wrought iron gates that once graced the two carriage entrances. These were crated and removed to our studios. Each was cleaned of failed coatings and corrosion, restored using traditional blacksmithing including forged elements and rivetted attachments. They were then coated using a system consisting of spray metalizing, and a series of high performance paints. The gates were then again crated and returned for installation at the site. 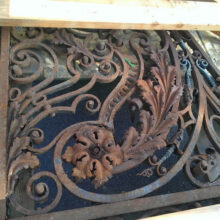 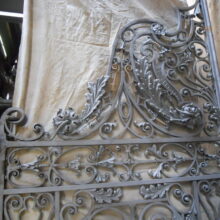 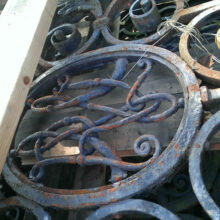 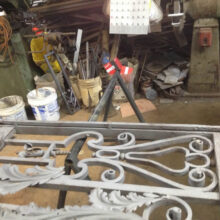