The Belasco Theatre was built in 1907 by David Belasco and designed by George Keister. Everett Shinn created the 18 murals and other parts of the interior décor. The neo-Georgian style, often used for residences, complemented Belasco’s desire for theatrical intimacy.

In 2010, EverGreene provided flat and decorative plaster restoration in the auditorium, lobby, and cellar. In the auditorium, EverGreene touched up returns at all the doors leading from orchestra to exterior and repair running molding detail at the door casement throughout; replaced and repaired the frieze, and created bracket molding at the stage opening from stage floor to proscenium arch above. EverGreene also worked on repairing ornamental plaster at the auditorium ceiling, the mezzanine, and balcony. In the cellar, EverGreene fabricated and installed two large and two small medallions on the ceiling and eleven dividers between murals. EverGreene also installed the new plaster on the wall and ceilings to match the existing adjacent plaster finishes.

EverGreene’s large scope of restoration work can be seen throughout, as the theatre is full of decorative marvels everywhere you look. 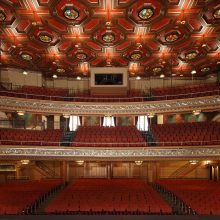 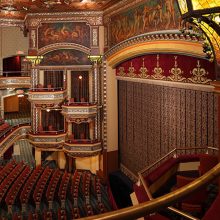 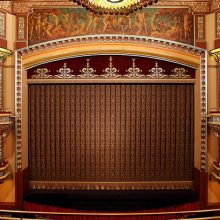