When a large plaster rosette fell from the ceiling of the Rose Reading Room in 2014, the New York Public Library had the ceilings of both the Rose Main Reading and adjacent Bill Blass Card Catalog rooms inspected. While the ceiling-high platforms occupied the Card Catalog Room, a fine arts conservator was able to closely examine the 105-year-old sky mural that hung 52’ above the floor. The investigation revealed irreparable damage including discoloration and severe loss of paint. The effort to recreate the ethereal mural, restoring the early 20th-century awe to the Card Catalog Room began.

Created by James Wall Finn in 1911, the 27’ by 33’ mural in the Bill Blass Card Catalog Room had yellowed significantly, making the mural irreparable. Though little evidence of the authentic color palette remained, EverGreene analyzing Finn’s design and used the colors present in the adjacent Rose Reading Room mural as a foundation for recreating the artwork in the Bill Blass ceiling.

EverGreene artists restored the decorative plaster and painted the sky in two large sections, uniting them on-site during installation, and returning the Bill Blass Card Catalog Room to its original elegance. 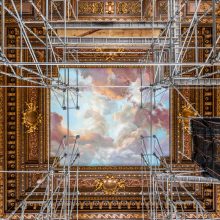 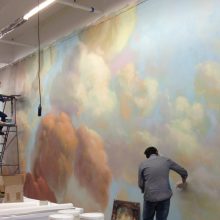 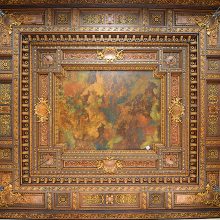