The California Theatre, originally known as the Fox Theatre, is a 1927 Spanish Colonial-style movie palace and EverGreene was part of the team to match and recreate the historic color scheme. The interior is an eclectic mix of Navajo, Rococo, and Swiss folk designs. The theater was originally designed by Weeks and Day and decorated by Tony Heinsbergen, an outstanding theater decorator of the period.

EverGreene’s work was part of the 2001-2004 renovation of the theater. The recreation of the decorative painting on the auditorium’s original plaster ceiling included: conservation, polychromy, gilding, and glazing of the elaborate stenciling on the ceiling beams. EverGreene’s decorative painters developed the color palette and techniques based on the on-site investigation of original colors and finishes. The team hand-mixed paints and glazes. 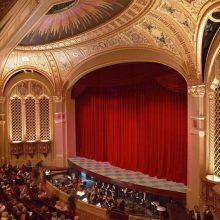 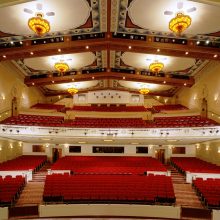 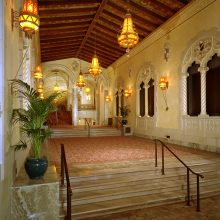