Sculptures atop the Vizcaya Casino were damaged during Hurricane Wilma. The original simple structural supports that had been installed were not effective at resisting this damage and, in fact, contributed themselves to the damage as fragile stone figures broke free from the supports at the mounting points and rocked against the now broken braces. Fortunately, no sculptural elements fell from the building but the damages confirmed that the mountings needed redesign as part of the sculpture restoration campaign.

A new free-standing stainless steel structure was engineered for four limestone figures on the building parapet. Each consisted of a tripod that was mounted to the building roof using a dismountable method that allowed for future re-roofing of the building. The tripod supported a tubular “strongback” that ran vertically along the rear of each figure. The structure was designed to be as minimally visible from the ground as possible. All contact points between the support structure and the stone figures were padded with neoprene. Aircraft grade stainless steel cable, shielded in nylon sleeves, was wrapped around the figures at a minimum of three locations to provide support to the figures. The design intention was not to rigidly hold the figures, as previous damage had occurred at structural mounting points, but rather to provide support only to resist tilting should the stones move on their mounts. The stones would then pull against the cables, which only allow for a couple of degrees of movement. The mountings are nearly invisible from the ground. 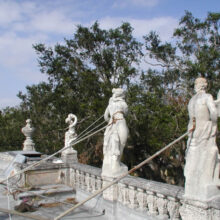 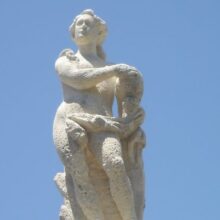 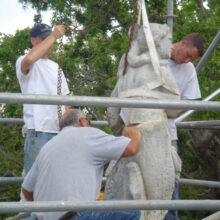 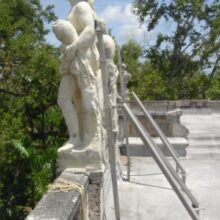