In preparation for Queen Victoria’s Golden Jubilee celebration, the Corporation of Hamilton commissioned an elegant cast iron bandstand for Victoria Park, adjacent to the City Hall. The bandstand was built by the Scottish firm of George Smith & Co. Foundry, Glasgow. The carefully detailed cast iron pieces were shipped to the island where they were assembled with wood beams and corrugated steel roof panels. All metal elements were galvanized prior to assembly and the application of other coatings, an early and innovative effort that proved very effective in the preservation of the structure.

Nevertheless, over 100 years of exposure to the marine environment and hurricanes have taken their toll on the structure. Over 11 layers of paint were found on the roof panels, which still had suffered extensive loss from corrosion. Several decorative railing panels had been removed and lost. Other decorative elements had cracked or been broken from stresses or impact. Well-meaning but misguided maintenance and improvements had raised the grade of the concrete deck and replaced the original heart pine ceiling with gypsum board. Electrical services and drainage were not functioning as desired.

We were contracted by the Corporation to assess the Bandstand and develop a treatment plan in 2008. The entire structure was surveyed and documented. Measured drawings were prepared of all elevations and sections to assist in describing the observations and quantifying the work. Details were also noted on annotated photographs in a written assessment report. A budget for the work was prepared and submitted to the client. 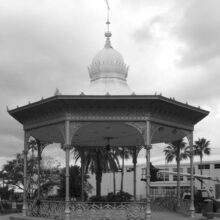 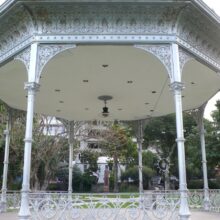 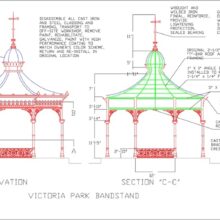 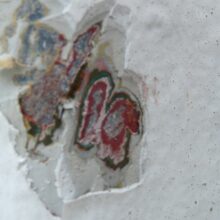