Awards
Cathedral of the Madeleine - EverGreene
Skip to content

Cathedral of the Madeleine

Construction on the Cathedral of the Madeleine was started in 1900 and completed in 1909. The original architects were Carl M. Newhausen and Bernard O. Mecklenburg. The Cathedral combines a predominately Romanesque exterior with a Gothic interior. In 1917 John Theodore Comes undertook the beautification of the original plain interior. The Comes interior was inspired by the Spanish Gothic of the late Middle Ages. Colorful murals were added at that time, as was dramatic polychrome throughout the building. The ornate reredos shrine of Saint Mary Magdalene and other various shrines were notable features of the Comes renovation.

From 1991-1993 there was a much-needed restoration of the interior, which had suffered the effects of dirt and pollution in the intervening decades.  Beyer Blinder Belle brought on EverGreene to assist with the $9.7 million project that involved every aspect of the interior. The renovation even included liturgical elements of the Cathedral that needed to be brought into conformity with the liturgical reforms that followed the Second Vatican Council.

EverGreene’s role was to clean and conserve the extensive decorative finishes. Our team cleaned and conserved the polychromatic decorative paintings found throughout the cathedral. They also conducted detailed conservation cleaning on the ornate reredos shrine. Our team conducted mural conservation on the artwork in the apse to return it to its original vibrance. 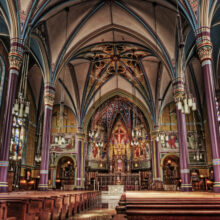 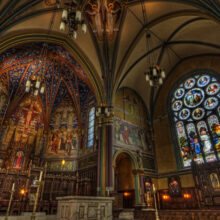 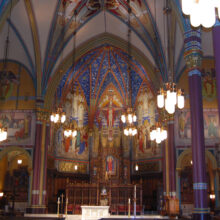 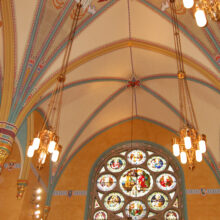 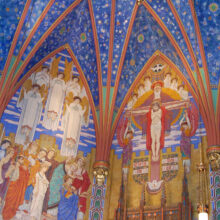