Commissioned in the mid 1930’s and installed in September 1939, the Celestial Sphere is one of Paul Manship’s largest works. In form and concept it is representative of his most productive period, featuring classical imagery in a streamlined form and vibrant decorative scheme. Gilded signs of the zodiac and stellar constellations are mounted on a armillary sphere pointing at Polaris. It once rotated in time with the earth, keeping the more than 830 silver stars on its surface in alignment with the night sky above. Unfortunately, the mechanism failed, weathering caused loss of gilding, and vandalism lead to loss of elements.

In preparation for the upcoming centennial of the founding of the League of Nations, the UN (its successor organization) planned the restoration of the Sphere. This artwork was a gift of John D. Rockefeller as a tribute to President Woodrow Wilson.

We worked with B+S Engineers of Geneva, Switzerland to assess the conditions and develop plans and contract documents to implement the necessary restoration. Work was completed in time for the centennial of the founding of the League of Nations. 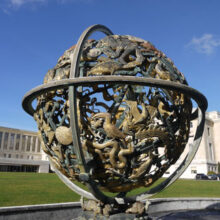 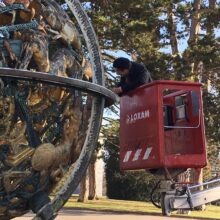 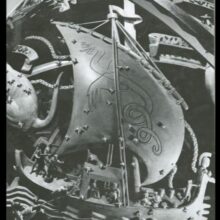