The US Holocaust Memorial Museum is the preeminent resource for study and reflection on the Holocaust in the US. Designed by architect James Ingo Freed of Pei Cobb Freed, the museum opened to great acclaim in 1993. However, within 10 years the building exhibited cracking, spalling and losses on its coping stones. We were contracted in 2004 to assess the condition, perform emergency stabilization removals, and prepare mock-up examples of repair methods on these coping stones. Losses and damage were noted in association with the installation of a bronze and copper lightning protection system. The root cause of the coping damage was determined to be caused by the galvanic reaction between the copper cables and the zinc anchors leading to corrosion,, expansion, and cracking of the stone.

Mock-ups were based on the study. Areas of damage and loss were cut out and repaired using composite patches or stone dutchman. Various anchoring methods were tested; and a compatible system employing an internally threaded anchor with threaded stud and nylon insert locknuts was ultimately identified for implementation.

Repairs were subsequently performed according to the recommendations prescribed. The existing lightning protection system was temporarily removed to replace all zinc-alloy anchors with the recommended new anchor method, composite patch repairs at anchor removal locations, and stone dutchman to repair cracking, spalling and loss. In addition, all anchors were repositioned away from vulnerable stone edges. 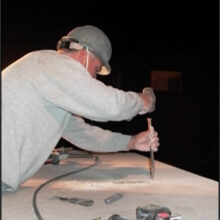 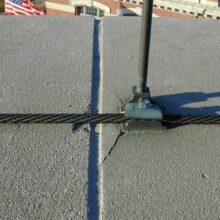 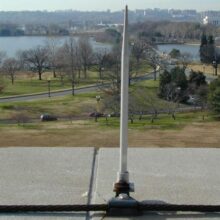