In 2006, EverGreene cleaned and con­served 11 murals adorning the walls of the City Council Chambers at Yonkers City Hall. Commissioned at the turn of the 19th century, these history murals depict the story of Yonkers, including the settlement by Lenape Indians and Dutch settler Adriaen van der Donck negotiating with Indians in 1646. Over the course of a hundred years the murals had suffered significant damage from environmental causes including dust, sunlight and cigarette smoke. Many of the mural scenes were fading and some barely discernable. At that time, Ev­erGreene was also asked to perform an investigation of the original decorative scheme of the Council Chambers interior.

Three years later, EverGreene was asked to return to the Council Chambers, this time to perform a restoration of the Chamber. EverGreene’s decorative paint­ers created a mockup to interpret the study and create a balanced decorative palette. 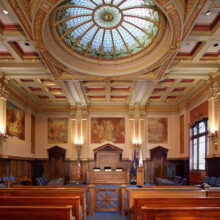 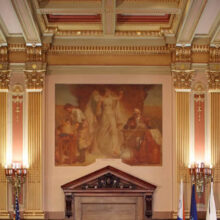 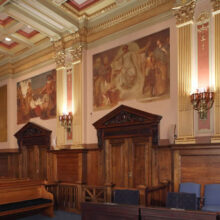 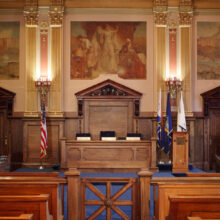 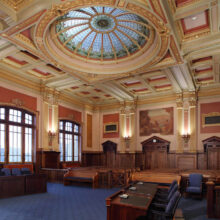