“Curl” was installed on the campus of Columbia University south of Uris Hall in 1968. It is the first large-scale commission completed by Australian-born artist, Clement Meadmore. It consists of a twisting form that maintains its square section as it torques and rolls in a series of curves. Over 13′ tall at its highest, and 30′ long, the black abstract shape contrasts with the formal geometry of the surrounding buildings. Unlike some of Meadmore’s other sculptures, this COR-TEN (weathering) steel form had always been painted black.

The steel structure suffered deterioration over the nearly half-century it has been outdoors. Moisture that had collected at water catch-points in the interior led to corrosion of the internal armature and steel skin. Years of exposure had led to chalking, fading and loss of the paint coatings, which exacerbated corrosion of the bronze surface. Surface dents and other deformations occurred as a result of mishandling by the public.

In 2015 we were contracted to restore the sculpture. Working with a team of skilled riggers, the piece was disassembled into its original 3 components, lower to street level with cranes and shipped to Manassas, Virginia. It was stripped of remaining paint. Losses were rebuilt with matching steel or compatible fillers. The structure was coated with a series of high performance systems consisting of zinc metallizing sprays; epoxy barrier coats and urethane finish coats. It was then returned to the site, hoisted and re-assembled in its original location. A tent was erected over it to allow finish fairing and final coating on site. Work was completed in the fall of 2015. 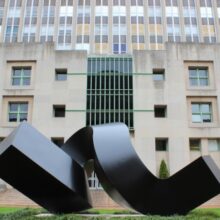 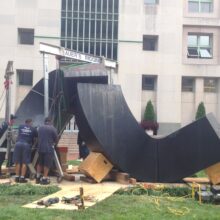 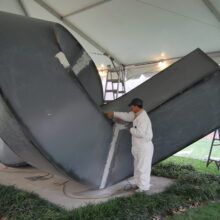 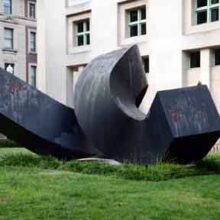 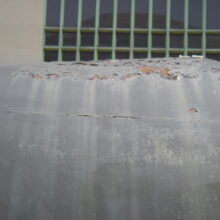