The directory cases at the Environmental Protection Agency (EPA), Washington, DC are a distinctive part of the building’s historic design scheme. The cases provide orientation and direction in both of the large, mirror-images buildings that make up the EPA headquarters. The cases were integrated skillfully and seamlessly into the construction of the front lobbies and upper-level corridors. The cases were originally either polished bronze or steel, painted to coordinate with the surrounding hallways.

The cases have been subject to a number of piecemeal interventions and modernizations over the years. Glass had been broken and replaced with modern plastic. Many cases did not open or close correctly after years of continued use. Inappropriate modern locks and latches had been added as a temporary way to hold the doors shut. The polished bronze cases were scratched, worn, and soiled. The steel cases had accumulated multiple layers of modern paint in various mismatched colors, making them visually distracting and impossible to operate properly.

We were contracted in 2008 to refinish and repair the directory cases. All existing failed coatings were removed. Losses in the cases were filled with threaded rod and tooled to match the surrounding metal. Mechanical repairs were performed as needed to ensure all cases were fully operable. Missing handles were replicated and modern plastic glazing was replaced with glass. New backer board and felt were installed in each. Bronze cases were refinished and coated with low-VOC lacquer; steel cases were painted according to the historic paint scheme. We worked with the GSA to ensure that all materials used were low toxicity, minimizing impact on the building, workers, and the environment. 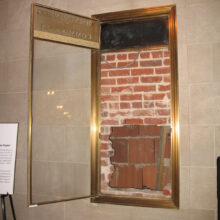 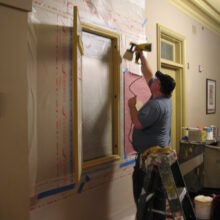 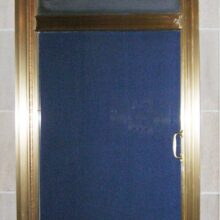