Throughout the years, the EEOB has had many occupants and the space had been over-painted with white paint and obscured by pilasters and crystal chandeliers. This office had also been divided into smaller rooms, and the original foyer enclosed. In 1987, one hundred years after it was built, EverGreene faithfully restored the room, returning the office and foyer to their original highly-articulated and ornamented French Second Empire style of architecture. The scope of the restoration included stenciling, gilding, and fixtures, displaying layer upon layer of classical detail that covers every surface of the room.

Twenty-five years after completing this restoration, EverGreene returned to the Old Executive Office Building as conservators working with Grunley Construction, to perform historic finishes investigations in preparation for the restoration of more spaces. 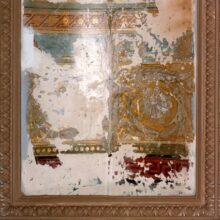 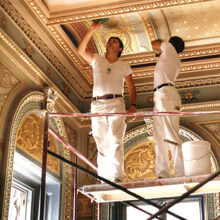