Lady Justice is the survivor of two zinc sculptures acquired to adorn the roof of the El Paso County Courthouse in 1886. This sculpture is almost certainly a production of the W. H. Mullins Company, based on its similarity to a well-documented Mullins catalog. The county razed the courthouse in 1917 and Lady Justice was relocated to various sites over the years, most recently to an indoor facility.

Zinc—a metal less costly and easier to cast than bronze—offered the public an opportunity to purchase decorative statuary capable of mimicking more valuable statuary materials (bronze, stone) at a fraction of the cost. However, cast and sheet zinc proved to be less permanent than it was originally claimed to be and its use in sculpture declined in the early 20th century.

We were engaged in 2010 to perform a condition assessment to document the condition of the sculpture, make recommendations for its conservation, and provide a budgetary cost estimate for the recommended work. Major conditions and failures included wholly lost elements, minor voids and cracks, metal fatigue, corrosion, and a thick accumulation of failing coatings. Paint analysis documented over a dozen layers of white and off-white paint layers over a gray primer. Treatment recommendations included specific guidelines for coating removals, metal reforming and repair, fabrication of a new internal support system, surface preparation, and re-coating with a high performance paint system. 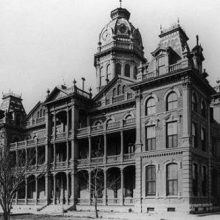 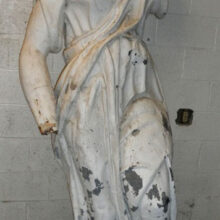 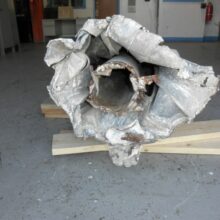 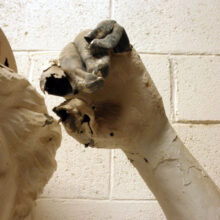