After transport and exhibition of the bomb and sled at another venue, the sled was found to have suffered losses, abrasion and damage to the paint finish when it was returned to the Navy Museum. We were contracted to assess the damage and determine a means of restoring the sled to its original condition.

The bomb was hoisted off the sled and stabilized at the museum. The sled was then removed for treatment. Paint analysis was performed to identify the historic color stratigraphy. The curator then selected a color that matched the current color of the bomb. Markings and plaques were removed and the sled was blast cleaned and powder-coated to match the selected color. The markings and plaques were re-installed, the sled was transported to the museum, and the bomb was reinstated on the sled for display. 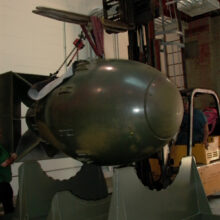 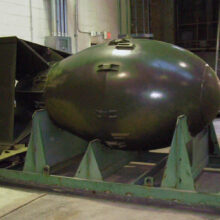 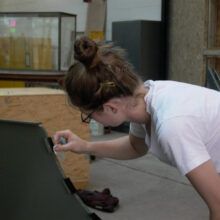