Fort Crawford Cemetery includes a small soldiers’ lot that was established in 1866. It contains 8 above-ground limestone box tombs for soldiers that were probably erected by their regiments in the late 19th century. The box tombs were in various states of deterioration, several of them structurally unstable due to crumbling foundations. All were heavily soiled with biological growth, which in some cases obscured inscriptions on the tomb lids. Limestone losses and deterioration were exacerbated by a hard, unsightly grey Portland cement mortar that had previously been installed in all joints. Many moulded limestone corners were lost.

We treated six of the eight box tombs as part of a large, multi-monument contract with the National Cemetery Administration. Treatment included cleaning, patching, repointing, and resetting four of the six tombs. The limestone slabs were carefully hoisted, and crumbling foundations were excavated and rebuilt so that the tomb’s walls could be reset level. The walls and lids were securely pinned back together. Fills and dutchman repairs were selectively integrated to match the original stone. Cleaning was very successful at removing the disfiguring biological growth that had accumulated, improving the overall appearance and restoring legibility of the inscriptions. 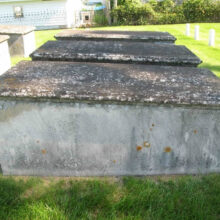 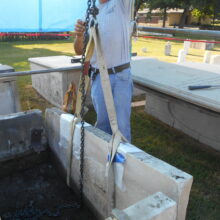 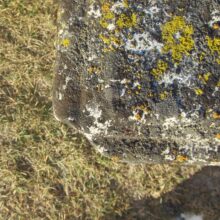 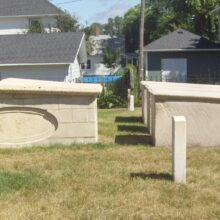 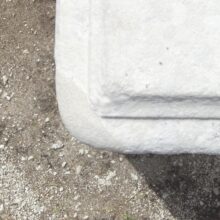 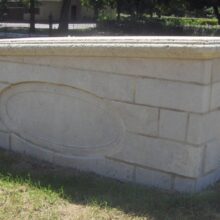