This project comprised of the mounting of two historic frescos that had been moved from its previous location, a mansion in Elkins Park, PA. The original pieces of art had been painted directly onto the plaster walls of the historic home.

At their new location, the murals were to be combined into one panel. One depicts Madonna and Child, the other a pair of angels.

Our goal was to install the fragile frescos in a manner that supported and protected the fragile plaster surface while allowing for future removal. The Madonna panel had been cut into three sections. After careful removal of the existing framing the plaster sections were reassembled and placed into an opening in the new wall. The embedded wire lath was screwed to plywood supports around the edges. Braces were adhered from the existing wall to the fresco back. The plaster joints and cracks that had formed during transport were filled and in-painted to match the original plaster surfaces. The two angel panels were first reinforced with fiberglass backings before being mounted within a stone niche. The plaster joint was then filled and in-painted. 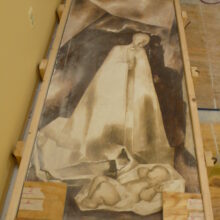 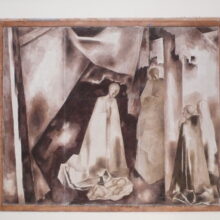 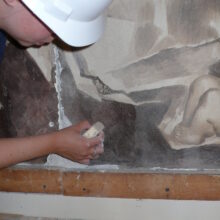 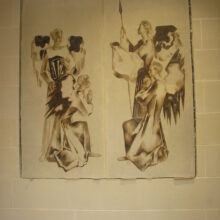