The GAR Monument was erected by the Grand Army of the Republic in 1873 to memorialize local men who lost their lives during the Civil War. The monument contains a bronze Union Soldier atop a light gray granite base with four bronze plaques listing the names of the dead. The base also contains two medallions with a relief of the head of Abraham Lincoln.

We treated the GAR Monument as part of a large, multi-monument contract with the National Cemetery Administration. The bronze soldier had previously been over-cleaned and coated with a thick, heavily pigmented lacquer, covering areas of green corrosion and widespread pitting, an original casting flaw. The Lincoln medallions had been over-painted with several layers of yellow and brown paint. All bronze elements were stripped of existing coatings, cleaned, re-patinated to even out the coloration, and coated with a clear lacquer. The medallions, which had been mounted with inappropriate hardware, were re-mounted with specially fabricated hardware

Treatment of the granite base included cleaning and patching of holes. 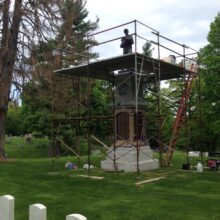 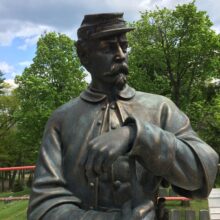 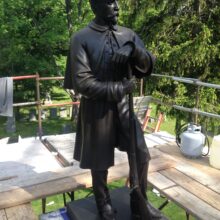 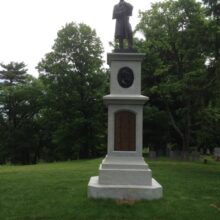