George Sugarman, an American sculptor based in New York, received his only formal artistic training under Cubist sculptor Ossip Zadkine in France circa 1950. In the late 1980’s NationsBank (Bank of America) commissioned Sugarman to create a new work for a site in downtown Tampa, Florida. “Untitled” was erected in 1988 at a busy intersection as a vibrant counterpoint to the surrounding office buildings. By introducing “Untitled” to this site, Sugarman said he hoped to show “…that an office or bank building can have a larger meaning than just its function, that such buildings can help form a symbol of creativity that energizes the whole area. ”

In 2006, we conducted a condition assessment to develop methods for conservation and relocation of the work. The thirty-four foot tall steel sculpture was accessed with a man-lift and inspected from the ground. The metallized surfaces were found to be in relatively good condition and there did not appear to be any structural damage although deterioration of the coating and corrosion at the mountings was noted.

Recommendations for the rigging and removal of the sculpture were developed for the complex site. A treatment plan was included in a thorough condition assessment report that was presented at the completion of the project. Recommendations included removal and replication of the original paint using a high performance system. 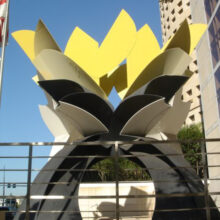 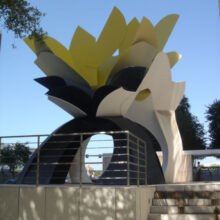 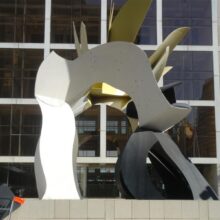 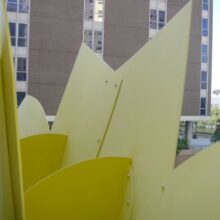