The sculpture of the Great God Pan by George Gray Barnard is part of the great outdoor sculpture collection on the campus of Columbia University. The sculpture, installed in 1907, consists of a bronze figure depicting the allegorical god Pan, reclining on a granite base.

After years of weathering and exposure, the sculpture had developed an appearance consistent with other weathered, unmaintained bronze sculptures. It exhibited both powdery light green and dark black corrosion products, disfiguring the surface. Dark soiling had become entrapped in wax remnants. The modest fig leaf had become lost. The anchoring system used to secure the figure to the base had also deteriorated, causing the figure to list out of alignment. The granite base was soiled as well.

Treatment began by hoisting the figure, repairing the anchoring system, and resetting the figure. The bronze was steam cleaned to remove all existing wax coatings and corrosion products were removed through a combination of pressurized water and mechanical cleaning. The figure and base were then cleaned with a mild detergent. Losses and failed bronze rod were repaired to match the surrounding metal, and the loose reed pipe in Pan’s hand was secured. The figure was then patinated to the approved tone of dark green with limited black and brown highlights, followed by application of two coats of hot wax and buffing. 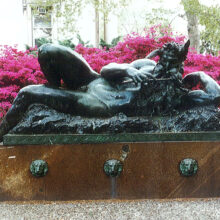 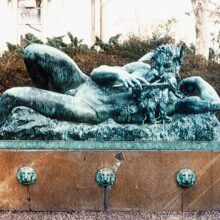 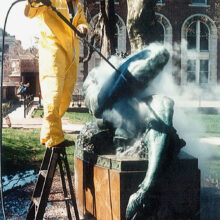 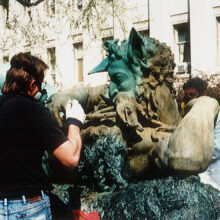