On the night of January 18, 1927, the Holy Trinity Church on East 72nd Street burned to the ground. Services were moved to St. Eleftherios Church on East 24th Street. In October 1929, with the collapse of the stock market, foreclosed land and buildings were available at ridiculously low prices. Land was purchased at the present location, and a new church was built.

In 1970, extensive renovation and decoration of the Cathedral began. The interior is filled with impressive Byzantine mosaics by Sirio Tonelli, imported Italian stained glass in true Byzantine colors and forms, and Botticino marble for walls, columns, and the altar area. The iconography on the dome, pendantives, and other areas, is the work of Georgios Gliatas, a student of the renowned 20th century iconographer, Fotis Kontoglou.

When EverGreene was asked to clean the ceiling of this historic Greek Orthodox Cathedral on Manhattan’s Upper East Side after a minor fire in 2008, the job initially seemed cut and dry. Our team was brought in to conserve the murals damaged by soot, high temperatures and water damage. After scaffolding was erected and EverGreene technicians were able to examine the ceiling conditions firsthand, however, the condition assessment changed dramatically.

In addition to the soot from the fire, decades of dirt had collected; there had been mild but consistent water damage, and the rising hot air in the cathedral had effectively baked the mural’s paint off of its canvas. With conditions such as these, if technicians had tried to simply clean the ceiling, they would have effaced the paint completely from the mural. The ﬂaking paint, the plaster insecurities, the tarnished gold, the paint loss, and the cracked canvas all required rigorous technical conservation treatment. The greatest challenge was the project needed to be completed within a constrained timeline requiring the mobilization of a large conservation crew in a small space, which was successfully accomplished. 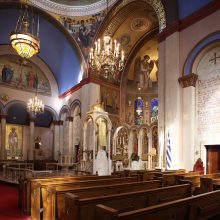 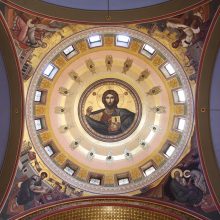 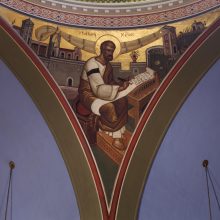 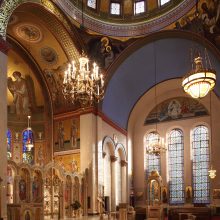 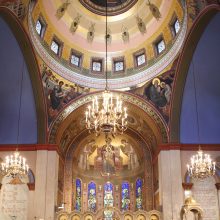 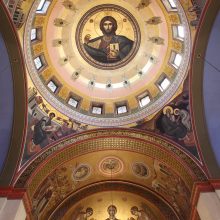 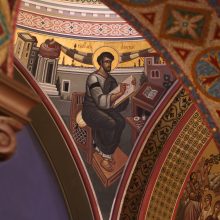 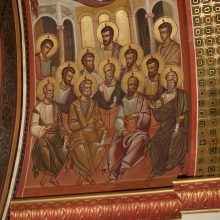